OK, just a teeny bit of promotion here: My first chapbook, published in Sept. 2011. Copies still available for $10.00 plus postage.  Email me at cstephen0ATgmailDOTcom

Here is a review done by Mel Sarnese of the Ontario Poetry Society for Above the Hum of Yellow Jackets:

When first picking up the book, it felt weighty — printed on thick paper. I was surprised to see the chapbook contained only twenty poems. The forest green and mustard yellow cover, with a beautiful photograph of a pollinating bee on a flowering bush is enough for a silver frame. The book, at once, pulled me in with the very first poem, ‘Secrets of a Poet’. A poem every poet would comprehend, ‘I fear the not knowing/I fear unfinished poems’.The poem sets the tone for the book. The narrator is looking for answers to her questions. There is a prevailing feeling of urgency — that things must be completed, or a legacy must be left behind.

The poet included both lengthy poems and those shorter and minimalistic in style. ‘finding cobalt blue 3’ is long in length, time was taken to build her metamorphical language as she brought in natural beauty while contrasting it with the urban grey and grit of a city. ‘Is there witness in the lap of a lake,’ One can feel vivid colour as a common theme throughout the poems. The poet used the coldness and hardness of stones and gravel to convery despair and depression. In the ‘Hunger of Cold Stones’, there is a haunting clearness of what she is saying. ‘Loneliness is that space between stigma and outcast/in the place where the eye does not see it/ It is told truthfully and intimately, as one would confide in a friend. In all her poems, a reader would immediately connect with both the narrator and the poetry.

In the minimalistic poem, ‘Poem as Garden’, written in three couplets and one single line, the style, together with her material — rocks, gravel —  perfectly captures isolation; each not a garden but alone together is just enough. My personal favourite is, ‘It Changes the Hour’. ‘The cry I bring down from the Hills/Waits to be heard/Light bends into the songs it sings/inside our heads.” Again with colour, the poet has managed to remain optimistic as she continues in her search for answers — as we all do. The poem ends with ‘the colour of hummingbirds/the taste of strawberries.” The book might only contain twenty poems but they contain everything one would like in a poem — weighty in wisdom and insight.  Carol A. Stephen can certainly transport us through the pages of this eloquently written chapbook. 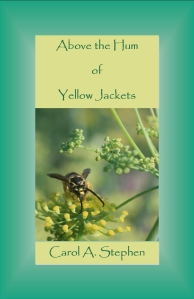 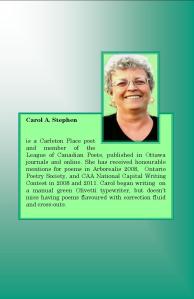 3 thoughts on “Above the Hum of Yellow Jackets”