“today’s prompt is to write entries for an imaginary dream dictionary. Pick one (or more) of the following words, and write about what it means to dream of these things: Teacup   Hammer  Seagull  Ballet slipper   Shark  Wobbly table   Dentist Rowboat

I wake from the dream again, my breath
coming hard in short gasps of stale night air
Always the same dream, the green teacup
filled the rim with almond-scented tea,

the pain behind the eyes, a small hammer
pounding in rhythm to my heart minutes
after I drink the last of the bitter brew.
My dentist hovers at the door, a seagull

perched on his left shoulder, in its mouth
pink ribbons attached to a size 4 ballet
slipper. The bird lifts off, settles
on the wobbly table beside my chair.

He pokes my cheek with his sharp beak,
once on the left, then hops round to the right
to peck three more times, each a little harder.
He’s a mean bird.

Through the doorway, there’s a bathtub.
I hear water splash but I’m too far away to see what.
The dentist beckons me forward, pushes me
through the door. I see a small child, in a rowboat,

a bigger-than-he-is fish swims laps around him.
The tub-water, red, has a familiar salt-iron smell.
The child points to the fish. Says, This is Sharky.
He loves the taste of blood. The echo of his words
still with me as I shake off sleep.

All it says in the dream dictionary
is to stop eating fish. 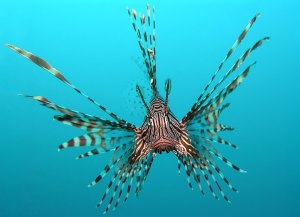 And now for our prompt (optional, as always). In her interview, Blake suggests writing a poem in which a villain faces an unfortunate situation, and is revealed to be human (but still evil). Perhaps this could mean the witch from Hansel & Gretel has lost her beloved cat, and is going about the neighborhood sticking up heart-wrenching “Lost Cat” signs, but still finds human children delicious. Maybe Blackbeard the Pirate is lost at sea in an open boat, remembering how much he loved his grandmother (although he will still kill the first person dumb enough to scoop him from the waves).

His small fingers
creep closer to the red button
as he tweets in a rampage about
this country or that.

He threatens, he promises
and tomorrow what he promised
he will deny, what he threatened
he’ll forget, or blame someone else.

Day upon day upon day, so that
we worry now that we’ll become
blasé, ignore his threats, believe
he’ll never do what he says he will.
We become immune. The man
is dangerous, but the bigger danger
is to dismiss him.  His is an evil
presence. And yet,

we see his humanity
in his need for ego strokes
and in his combed-over
yellow hair.